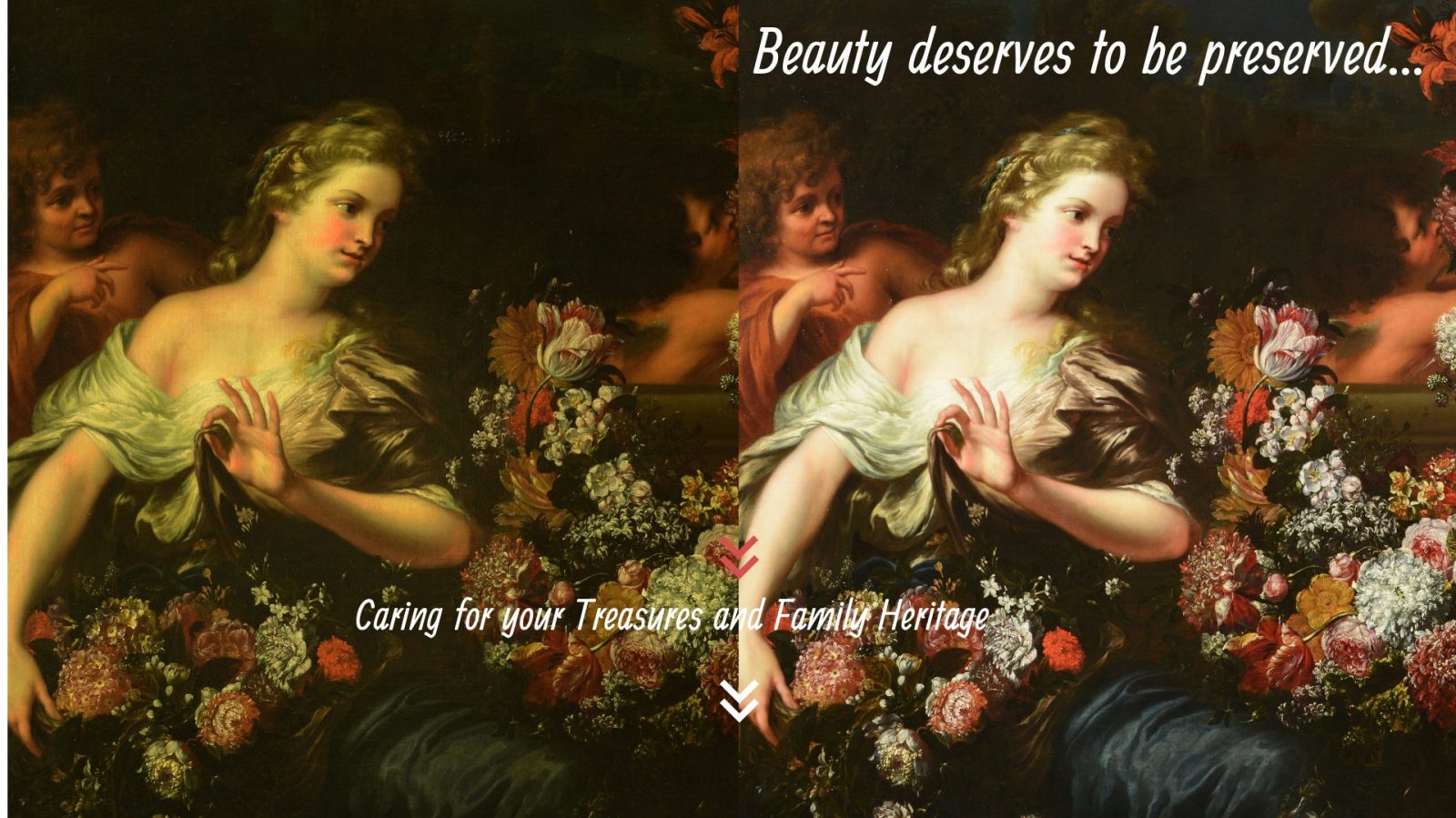 The list below will help you better understand the information you find in the condition report of your artwork:

Changes to part of the surface coating, paint layer or paint and ground caused by scraping, rubbing or over-cleaning with an abrasive product.

1.       The taking up of one substance by another through capillary, osmotic or solvent action. 2. The taking up (and consequent weakening) of light by, for example, a pigment layer. The radiation energy is converted into other forms of energy, e.g. heat.

An accidental deposit of “foreign” material that was not part of the painting process, f. ex. dried liquid residue, flyspecks, etc.

The taking up by chemical or physical forces of molecules of gases or liquids by the surfaces of liquids or solids with which they are in contact.

Age-related cracks, caused over time by environmental, mechanical and other stresses, appear in all older paintings. Starting from the picture support, these cracks run through all the layers of a painting

Often used to refer to a stretcher or a strainer, an auxiliary support is the secondary structure of the painting, the framework over which a canvas is stretched.

A rigid board attached to the back of an auxiliary support or frame to protect the painting.

Versatile binding in restoration; a mixture of synthetic resins and microcrystalline wax.

The film-forming material that holds together the pigment particles in paint, such as drying oil in oil paint and vegetable gum in watercolor paint.

General term for products that bind similar or different substances together. Linseed oil, for example, binds pigments and together with them forms the pigment layer. In context of gluing or sticking materials, called a bonding agent.

A loss of contact between the pigment grains and the binding agent, thus altering the refraction in the layer, resulting in gray discoloration. The cause is prolonged high relative humidity and/or condensation on the surface of the picture.

A white, bluish-white or yellowish haze on the surface of a painting that is caused by components of the paint and ground migrating to the surface.

Lifting in the paint and ground layers in the form of ridges that is caused by pressure (compression). Buckling is often associated with cracks, cleavage, and flaking.

A woven fabric painting support usually composed of one of the following natural fibres: linen, cotton, hemp, sometimes jute (burlap) or ramie, or mixtures of these materials.

A powdered deposit on a paint layer, caused by an insufficient amount of binding medium or weathering of paint from outdoor exposure.

A small amount of material (paint layer, ground or wood) that breaks away accidentally as a result of mechanical action.

Mechanical cracks in a roughly circular or cobweb-shaped pattern that are caused by a blow to or pressure on a painting.

Ripples in a canvas radiating from the corners.

In the course of time, every picture layer develops flaking as a result of aging cracks. Cupping is when the edges of these flakes turn upwards to form small “cups”.

A change in the original shape of a support, including bulges, depressions or cockling.

A concave deformation (indent) on the surface of a material caused by a blow or by pressure from another object.

Mechanical cracks often found at the corners of paintings and that can result from inappropriate keying out or from dropping the painting on its corner.

The finest possible distribution of the particles of one substance in another.

Drying cracks occur during drying of the color layers and are caused by chemical processes and/or physical influences; they are restricted to the paint layer. They are curved and relatively wide.

The oils used in European easel painting – linseed oil, walnut oil, and poppy-seed oil – are known as drying oils because they oxidize and “dry” under the influence of oxygen.

A thin protective strip of wood, metal or plastic attached to the sides of a painting and extending above the paint layers.

Painting technique whereby the paints are mixed with hot wax before being applied.

Partial or total covering of an endangered painting with Japan paper for its protection.

Mechanical cracks in a pattern resembling a feather which are caused by a line of contact against the back of the painting (e.g. a scrape) or a glancing contact on the canvas with a hammer when keying out.

Material replacing lost paint or paint and ground layers so that an area of loss becomes level with surrounding paint.

The partial or complete detachment of fragments of paint layers or ground from an underlying layer.

A transparent layer (oil or resin-rich; usually pigmented) applied by an artist on the surface of a painting.

A disfiguring deposit on or ingrained into the surface of a painting.

An opaque white or coloured preparation layer applied to the support as a base for the  paint layers.

Paint standing in relief on the surface of a painting following pronounced brush strokes or the thick application of a layer of paint.

A thin layer of paint applied over a ground by the artist to provide the base tone for the painting.

Substance that changes color in response to a chemical reaction, thus indicating that the reaction has taken place.

New paint applied on areas where original paint has been lost or abraded.

Separation of the various layers of a painting (ground, paint layer, varnish) as a result of particular internal and external influences,

The inside portion of a frame that borders a painting and is made separate from the frame.

Sometimes called relining. Gluing a piece of cloth (occasionally several) to the back of an original textile picture support as a strengthening measure.

A fabric that is stretched directly behind, but not attached to, a painting on canvas and that provides additional support and protection to the painting.

An area where paint or the paint layer and ground are missing because of damage or deterioration.

The process of attaching a canvas to a rigid surface (e.g. a wall, a panel).

Cracks that are caused by movement or excessive stress in various layers of a painting and that have sharp edges.

A custom-shaped narrow metal plate used to hold a painting in a frame.

Lining technique in which the lining canvas is fixed to the original canvas with an adhesive layer covering not the whole canvas, but only a few small areas.

Retouching in which the missing paint areas are painted in a neutral tone matching the original surroundings.

Retouching procedure whereby the defective area, after filling, is painted in fine dots and strokes in a color and form that from a normal observation distance makes the paint layer appear uniform.

Paint that was not applied by an artist and that covers original paint.

The paint layer lies between the ground and the varnish and may consist of a number of color layers.

In painting, a yellowed varnish. Also changes in the paint layer over the course of time.

Change made to a work by the artist in the course of its execution.

In restoration, examining a picture by tapping it to detect cavities in the paint layer, ground, or varnish.

Color-providing substance, embedded in, but not dissolved in, a binding agent.

If the binding agent in a color layer is destroyed, whether chemically, physically, or mechanically, the grains of pigment come loose in the form of powder.

A small hole through a painting.

Illumination from the side at a low angle, thus throwing long shadows. Used in restoration photography to show up surface irregularities such as lifting.

Repetitive abrasion by a sharp object or instrument that results in the loss or removal of one or more layers of material.

The visible perimeter of a painting in a frame (see Figure 9).

A solution, emulsion or gel applied to raw canvas or another painting support before the ground layer is applied in order to protect the canvas fibres from the oil medium and reduce the absorbency of the support.

The abrasion of original paint by inexpert cleaning.

An auxiliary support framework (usually wooden) with fixed corners, over which a canvas is stretched.

An auxiliary support framework (usually wooden) with expandable corners, over which a painting canvas is stretched.

A line of cracks or deformation in a painting’s surface that follows along the inside edges of the stretcher or strainer bars.

A material on which a ground and paint are applied.

A deposit of dust, dirt, grime, nicotine, soot or other contaminant on the surface of a painting.

The part of a canvas that wraps around the edges of the auxiliary support and that is held in place by tacks or staples (see Figure 1).

Damage to fabric or paper where it has pulled apart, leaving ragged or irregular edges.

Lifting in which the paint, or paint and ground layers, are forced upward in a tent shape.

Retouching technique whereby the restorer, having filled the defective area, paints it over with fine, parallel colored stripes.

A complex weave that creates a diagonal pattern

Procedure whereby preparation to be examined under the microscope are stimulated to fluoresce by intense ultraviolet radiation. This enables particular substances to be distinguished.

A solution of resin dissolved in a solvent, which dries to form a transparent film. Varnish is usually used as a final surface coating over a finished painting to even out the gloss, to saturate the colors and to protect the paint.

A change in the surface from the effects of abrasion.

Natural or synthetic substance that reduces the surface tension of water or other liquids, enabling them, for example, to penetrate the cavities in a damaged paint layer.

Puckers or ridges and furrows in a paint or varnish film that occurred during drying.

Do you have more questions about art conservation in general? Check out our FAQ page!